Who is Alondra Anaya?

Alondra Anaya is a journalist from  America who currently works at Telemundo 52  as Weather Anchor. Telemundo 52 is located in  Philadelphia, Pennsylvania, United States. Anaya won a two-time Emmy award for the 2019 story “Primera Tormenta Invernal”.She covered the first winter storm of the season in the Northeast. 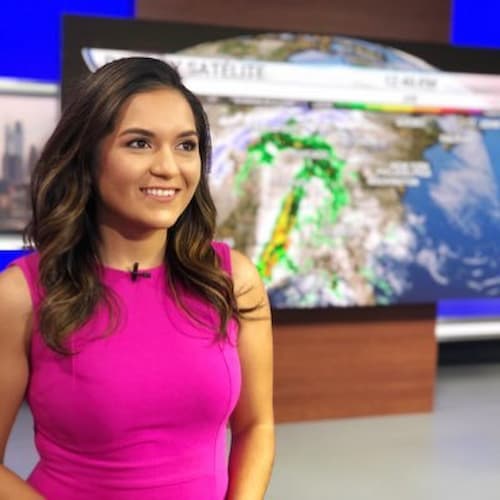 Anaya also contributed to the special “Unidos en Tradición.” in 2020 and won her 2nd Emmy Award. She can be followed on live forecasts on weekly mornings at 6.00 am and 12.00 p.m at Telemundo 52 station. Anaya is passionate about her career since her tender age and enjoys every bit of it.

Anaya is 27 years as of 2021 since she was born on the the23rd of July 1994 in Fontana California. Therefore, she celebrates her birthday on July 23rd of every year.

Anaya was born and raised in Fontana California. She manages to keep information regarding her parents, siblings, and extended members of her family away from the limelight. We will however update this information once it’s available to the public.

Anaya has for a long time been keeping details regarding whether or not she is dating private. It is therefore not known whether she is married or not but the information will be updated once available.

Details regarding whether or not Alondra Anaya has any children are not available to the public at the moment. However, we will update this information once more details concerning this are available.

Anaya was employed by Khsl Tv in Chico, California Area as a Production Assistant Intern from Feb 2016 – Apr 2016. Her assignment included shadowing production assistants who operated the teleprompter, floor direct, operating the audio board, and editing videos used in the newscast. However, Anaya became the Production Assistant from May 2016 – Dec 2016.

Anaya joined the Action News team as an Assistant Producer from Jan 2017 – Mar 2017. She produced stories for a 30-minute newscast featuring both local and world news. However, she was promoted to a Weather Anchor/Reporter, and Fill-in Anchor from Mar 2017 – Mar 2018. Her assignments were the production and presenting daily forecasts for the Chico-Redding market on-air, five days a week, in Spanish. Also would shoot, write and edit stories for both English and Spanish newscasts. Alondra builds graphics on Accuweather to include in weather segments.

She joined the KVEA station on May 31st, 2021 as a weather anchor for the station’s Noticiero Telemundo 52 newscasts. However, she joined from sister station WWSI Telemundo 62. She had been a midday and afternoon weather anchor at the Philadelphia station since 2018.

Anaya joined NBC Universal Media as a Full-time Weather Forecaster in Mar 2018 in Greater Philadelphia Area. In addition,  Anaya is a Bilingual Weather Anchor and produces as well as presents weather forecasts for WWSI on a daily basis. Alondra manages weather content for television, OTT, social media, and the WWSI website. Also, involved in community outreaches among many others.

Anaya is highly skilled in Public Speaking, Video Production, and  Video Editing. She is good at editing and broadcasting. Anaya won a Mid-Atlantic Emmy and Mid-Atlantic Emmy. She is also fluent in Spanish.

How Much Does Alondra Anaya Earn?

How Much is Alondra Anaya Worth?

As a Weather Anchor, Anaya has been able to accumulate a net worth that ranges from $1 million to $5 million.